A snapshot of relations among neighbours over the course of nine months shows that vulnerability caused by COVID-19 has not been exploited against neighbours. It also, however, has not engendered significant solidarity, except in cases where it already exists.

The pandemic has allowed some friendships to be strengthened at the expense of pragmatic ones, but in general each country has pursued its existing foreign policy orientation.  The pandemic offered China a window of opportunity to present itself as a friend in tough times. China’s donations of personal protective equipment, publicly endorsed and praised by Western Balkan politicians, led to a new concept – ‘mask diplomacy’. 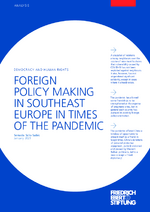 Foreign policy making in Southeast Europe in times of the pandemic