New Upsurge of the Corona Crisis in the Western Balkans, Croatia and Slovenia, Report Four

We have asked experts, political scientists, sociologists and political analysts to write reports on the response of the governments to the Corona crisis and their effects on democratic institutions and public life. The reports cover the situation of “Democracy and the State of Emergency” in Albania, Bosnia and Herzegovina, Croatia, Kosovo, Montenegro, North Macedonia, Serbia, and Slovenia. Today we are publishing the fourth and last edition in this series.

Elections were held in Serbia and Croatia. In both countries, the incumbent parties were the clear winners while voter turnout was below 50%. A new upsurge of the numbers of infections is putting the fight against the pandemic back on the political agenda. The re-introduction of repressive measures is met with strong resistance by the population and has led to violent clashes in Serbia. Detailed analyses of these developments in the respective countries can be found in this publication. We hope that with this publication and the previous reports on “Democracy and the State of Emergency” we were able provide insights into these processes and have allowed for some interesting comparisons. 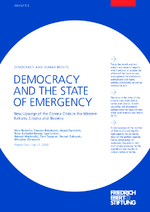 Democracy and the state of emergency

New upsurge of the Corona crisis in the Western Balkans, Croatia and Slovenia ; Report four
Belgrade, 2020