Learning from the Montenegrin Example.

Intensified immigration and demographic factors have led to an increased ethnic and religious heterogeneity of West European societies and pushed the national identity issue to the forefront of political debate, thereby causing a conflict over criteria for membership in the nation.

There are three key lessons that West European political actors could learn from Montenegrin example. 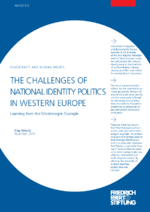 The challenges of national identity politics in Western Europe

Learning from the Montenegrin Example
Belgrade, 2019